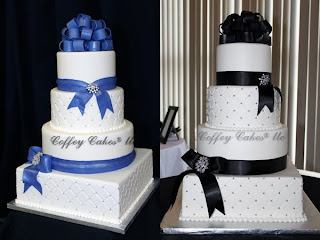 I got a call from a mother of the bride who was asking about getting a fake display cake and then serving sheet cakes to save money. I am just not a fan of this. Whats the point?

I understand about needing to save some money on a wedding. They are expensive enough as it is. And I am always happy to come up with less expensive options such as a smaller cake with sheet cakes in the back, or buttercream icing rather than fondant. But a fake cake? Why would anyone want to do that. Do you want wedding pictures of you and your new husband beside some dummy cake that's been to 50 shows and is in 50 other brides pictures? Do you want to pretend to cut into it. I just don't like it.

The little money that you save on getting sheet cakes you have to spend to rent the dummy. There will likely be a deposit on the fake cake as well to be sure it is returned. If your caterer/venue is the one supplying it then you might not have the rental/deposit because they know they will be there at the end of the night to collect it.

So you will either be limited to choosing from the dummies that are already available, in which case you may not get the style/colors that you prefer, or you will have to have one custom made. Which is actually twice the work for the baker. No savings there.

The time and materials that are required to make a dummy cake are almost the same as a real cake. Of course you don't have to buy milk,eggs and flour, but you do still have to buy styrofoam dummies and pay to have them shipped - so there is still an expense there (plus you have to buy milk,eggs and for the sheet cakes). Of course you save baking time on fake cake, but that's not really your time that you are standing over the product working on it - the oven is doing the work so you're not saving much there (but the sheet cakes still have to be baked). Exactly the same time and ingredients go into decorating the outside (PLUS the time and ingredients to decorate the sheet cakes) so - don't expect to save much at all to have a custom dummy cake made and then serve sheet cakes. That's actually MORE work. Why not just make the actual cake edible and be done with it.

The blue cake pictured is the one that the mother of the bride called about, it's a dummy cake that is on display at my shop. The cake beside it is a real cake iced in buttercream that I made for a real wedding - and people really ate it. The buttercream option saves money as well as the fabric ribbon (rather than a fondant one), and it looks just as good as the fake cake. It might cost $500, but we're talking about a beautiful dessert that feeds 150 people - at a WEDDING. It's a monumental event. Once in a lifetime (hopefully). You spend thousands on a dress and much more than that for a room. Thousands on flowers/photography/videography. $500 for a beautiful cake sounds pretty cheap enough already. And if you think about it - would you buy an ugly/used/or otherwize not-what-you-really-want dress just to save $50 or even $100? Probably not. Don't let someone talk you into something you'll regret.
Posted by Wendy at 9:31 AM


I, along with my husband, Greg, own and operate Coffey Cakes® llc in Lynchburg, Va. We make wedding and special occasion custom cakes.


Visit My Website at http://www.coffeycakes.com/ to view more pictures of cakes that I've done.

Promote Your Page Too

All cake photos and articles/posts displayed on this blog are the work of Coffey Cakes® llc (unless stated otherwise) and are not to be copied, used, published or distributed in any way without direct written consent of the owner.

Coffey Cakes® is a registered trademark and it is a violation of federal and anti-dilution laws to use in any way in another business.Please visit the United States Office of Patents and Trademarks website for more information on trademarks.